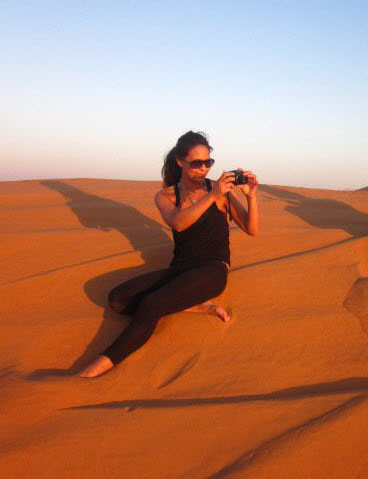 Fresh out of performing arts school, dancer Nicci Perides couldn’t believe her luck when she was sent to Italy to work in the summer of 1999. But she couldn’t have realised when she embarked on her first lone train journey across Europe that the experience was also going to change the course of her eventual career.

“At that point I had never been anywhere on my own,” she recalls. “Travelling across France and into Italy with no real clue of where I was going really excited me. I was armed with a ticket and the knowledge that I had maybe six minutes in Milan to make my connection – and of course no mobile phone to rely on if it all went wrong.”

She made her connection – thanks to an old Italian lady who took pity on her and dragged her on to the right train – and continued on to Lake Garda and Venice before eventually returning home.

But within six months she was off on her travels again, this time for an eight-month stay in New Zealand, followed by a week in Japan.
She worked for several years as a dancer before making the “natural progression” into television – initially as a presenter on entertainment shows and later working on documentaries and script writing.

But whenever work and finances allowed, she would be back on the road again – to Central America, Europe, the Caribbean, America, South East Asia and parts of South America. She had always kept travel journals, but a chance meeting with a travel journalist on a chicken bus in Nicaragua prompted her to explore the possibility of pursuing her hobby as a career.

“I began to realise that I wanted to progress more into writing and away from presenting. I decided to take the LSJ distance-learning journalism course to further my career,” she says. Before long she was writing unpaid freelance travel articles for online magazines – a necessary first step, she believes: “It gives you the vital skills and confidence in pitching articles and it also helps build up the all-important portfolio.”

As she continued to work through the course modules she picked up her first paid commission writing a two-part feature about family history for The Times Magazine.
“It was a great piece to write as it gave me the chance to thoroughly research my own family history,” she recalls. “I even discovered my great, great grandfather was an illusionist!”

She continued her studies with the LSJ and soon started picking up other commissions – a regular slot writing buying guides for Overseas Living magazine about different countries, a travel column for DV8 magazine and other articles for TNT, Business Destinations and Jetaway magazine.

“The course gave me confidence in my abilities as a writer and taught me the vital skills needed within journalism, including media law and newswriting.

“I was then offered a position with Time & Leisure magazine as an editorial assistant and quickly progressed to writer and then online editor.”

Before long she had moved back into freelancing, initially as a sub-editor for Net-a-Porter and then as assistant online editor for DOTWNews.com, based in the United Arab Emirates.

The initials stand for “Destinations of the World” – and for a 30-year-old who has already travelled to dozens of different countries (47 so far and counting) – there could hardly be a more appropriate outlet.

“What I have discovered is that the LSJ gives a great foundation in journalism training,” she says. “I would never have believed I would have achieved so much in such little time. I only began the course two years ago – and I’m now doing the job I love.

“I absolutely love travelling and writing and it’s just amazing that I can combine the two and actually get paid for it.  It’s my dream job.” Not all the assignments have involved five-star luxury, of course. One of her most memorable was a seven-week trip to West Africa taking in Ghana, Mali and Burkina Faso and sleeping either in a tent or under the stars.

“It was quite a test only being able to shower in waterfalls and having to go for a pee in the bushes – after checking for elephants first!”
Elsewhere she has climbed a live volcano in the pouring rain in the dark with no torch (Guatemala), been taught to surf in Nicaragua by a drunk American and discovered the perils of embarking on a toboggan run in a sledge with no brakes in Zermatt, only to be deposited unceremoniously face down in a pile of snow.
“It’s quite a change now, working in luxury travel and experiencing five-star hotels,” she admits. “But I’ve had many amazing experiences as a travel writer so far. Of course you have to suffer many setbacks and criticisms, long hours and exhausting schedules while travelling, but that’s all part of the fun.”

So what’s the secret for aspiring journalists eager to follow her on the travel-writing trail?

“The secret? Keep bugging editors and know people in the right places,” she says. “The best advice I can give is to get as much as you can published to start off with to build up your portfolio. This does mean writing for free to begin with.

“Also research thoroughly the magazines you want to write for and tailor each pitch to that specific demographic. Talk to as many people as you can at travel shows and exhibitions as a lot of it is who you know.

“During my studies at the LSJ I got myself work experience placements with different magazines which helped a lot in building my contacts book.

“You just have to keep plugging away and never entertain that little voice in your head that tells you to give up and move into something easier.”