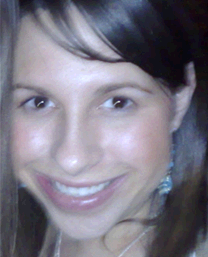 Sarah G qualified as an optician when she left university – but she had harboured an interest in broadcast journalism from an early age.

Helping out friends on hospital and university radio stations had given her a taste for broadcasting and the LSJ postgraduate diploma course seemed a logical way to explore the possibility of a switch in careers.

Writing for publication was great experience, she says, but it also helped her realise that she found broadcasting more exciting than print journalism.

“I was doing stuff for More magazine but I really loved the buzz of radio, the fact it’s happening there and then,” she says.

Now 27, she took the three month course in January 2006, before moving back to Yorkshire, where she thought she had a better chance of finding paid work.

“It was a scary time as I had left my career as an optician so had a lot of pressure riding on me to succeed in my new career – which was something I had wanted to do for years,” she recalls.

Her starting point was to contact every radio news room in Yorkshire and Manchester.

“I found all the news editors very friendly and willing, but you do have to be persistent. I found calling up on the phone much better than emailing as it is more personal and they are more likely to respond. Don’t worry about calling again and again if they don’t respond. A newsroom is very busy and you are one of many on a pile...so a bit of gentle prodding goes a long way.

“They all invited me to come in for a day and show them what I could do, and this led to me gradually building up regular work. By September I was getting five to six days' work a week and was even turning down freelancing shifts as I was so booked up.”

She worked for a variety of stations, from BBC Leeds to various emap stations and the regional Real Radio station. Three-quarters of the shifts were presenting jobs, the rest reporting.

Eventually the freelancing led to her being offered a full-time job with Stray FM, a commercial station based in Harrogate, as well as contributing regularly to the BBC as a correspondent on entertainment matters and health, and working on 5Live, the Asian network and other stations.

After working at Stray as deputy news editor for 14 months she relocated to Canada where she now lives in Ottawa, working for the news talk station CFRA.

She presents her own weekly international news show, co-hosts a lunchtime Friday show and produce the weekly afternoon show as required.

“The best advice is to be persistent,” she insists. “Don’t give up – you’ll have loads of lows, especially when you get rejected from jobs. And give 200 per cent when you are on a shift. Put in extra hours, always ask everyone if they need anything doing and have loads of story ideas to hand.”